skip to main | skip to sidebar

Jagannath temple on verge of destruction


Jagannath on road to oblivion

Demolition of the frontal façade of Jagannath Mandir at city's Tantibazar is going on while the authorities concerned are still unsure about who has the responsibility to save the 100-year-old temple.

A big obstacle in saving the structure lies in the fact that the authorities are yet to make a complete list of city's heritage buildings.

The temple committee started knocking down the structure on Saturday night. A new building is being constructed inside the temple compound.

According to locals, the temple was built by Hariprashanna Dey, Kartik Sen and other elite of the trader community of the area.

Corinthian capitals, small ornate domes, pilasters, relief work, decorated cornice and parapets are some of the important features of the temple.

"Parts of the parapets are broken now. The structure has an oriel window jutting out of the wall. The pinnacle was once broken by the Pakistan Army during the Liberation War. Then it was redeveloped," he said.

"We are trying to raise funds to save it. The façade can be preserved and partially reconstructed. We have sought one-month time from the temple committee to provide necessary technical assistance to save the façade."

Babul Das, head of the temple committee, said they have tried their best to save the façade of the temple but they could not do it due to lack of funds.

"We wanted to save the façade but we do not have enough money. The architects told us that they would manage funds but they couldn't. Therefore we are not in a position to save it,” he said.

“The best we can do is to reconstruct the whole thing after demolition. But we have to knock it down for the new building," said Das. “The façade stands as an obstacle to the worshippers coming to the temple,” he added.

"Due to the rickety façade we are facing problem in worshipping. We have a string of Puja in the next few months -- Jhulon, Monosha Puja, Janmashtami, Bishwakarma Puja and Durga Puja. So we will have to prepare the temple now,” the temple committee chief said.

Das said Rathjatra is the most gorgeous religious event at this temple. But in the last Rathjatra they faced problems because they had lots of worshippers who faced difficulties getting into the temple.

“Till now we have broken only the pinnacle of the façade which can be reconstructed," he said.

Kajal Devnath, president, city unit of Hindu, Bouddha, Christian Oikya Parishad, said he is trying his best to save whatever is left.

"I have told the Urban Study Group that if they can take the responsibility and provide technical help in saving the structure then I can convince the temple committee," he said.

If a sponsor is not found or the government do not come forward in time then it will be hard for anyone to save it. This is the stark reality, he said.

Asked what steps the recently formed heritage committee under the government's Urban Development Committee, will take regarding the matter, one of its high officials said that since their convenor is not in the country they are waiting for him to return.

On his return, the committee will take action. Official letter will be sent to Rajuk about the buildings which were not listed but are invaluable from architectural point of view.

"The two main jobs of the heritage committee are to prepare a list of the heritage buildings and to apply to the authorities concerned to save the buildings. But the committee cannot take any action. We are not empowered to stop any demolition work. We can only make a request," said a high official seeking anonymity.

"Right now we are observing what the temple committee does. We have informed the concerned Rajuk officer about the demolition," he said.

But Aminur Rahman Suman, Rajuk's authorised officer of the area, said none from the committee has contacted him.

“I sent a inspector to the spot Sunday evening following a verbal request from an architect. As far as I know they have stopped the demolition. But it would have been easier for me if I had a written complaint,” he said.

These buildings are under the jurisdiction of DCC according to clause 111 of the Dhaka City Corporation Ordinance 1983, he said.

He said DCC is responsible for the maintenance of any structures, be it a building or a footpath. DCC has a technical committee comprising representatives from Rajuk, PWD, house building and disaster management committee, for identifying risky buildings in the city.

"After identifying a building we make an assessment of the building and serve a notice to the owner for necessary repairs to make it risk-free. If he does not comply, then we serve another notice to knock it down,” he said.

Sirajul mentioned that 19 people died in 2004 due to building collapse in Shankharibazar. At that time DCC prepared a list of risky buildings but Jagannath Mandir was not on the list. At that time it was a stable structure. 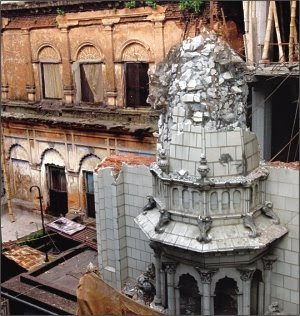 The partially demolished façade of Jagannath temple stands with a broken pinnacle.